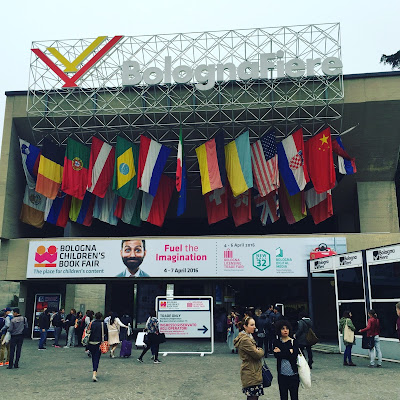 I attended the Bologna Children's Book Fair for the very first time this April! Ever since I learned about this Fair, I had always wanted to attend to see what it was like. I'd like to share my overall experience and impression for those of you who are also considering making the trek to Italy to check it out!

While it was not the ideal event for meeting Art Directors, it was an excellent event for research and development of various publishers around the world. It opened my eyes to new opportunities I never would have even known existed. 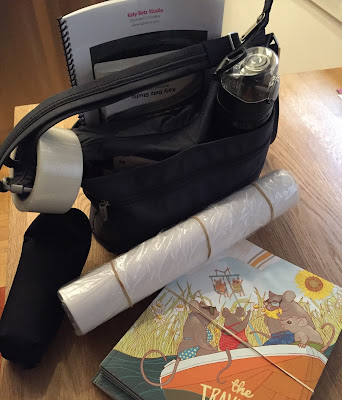 There are several other blog posts from other illustrators who attended (be sure to check them out!) and I took their advice on what to bring and what to go do/see. Here's what was in my daybag: 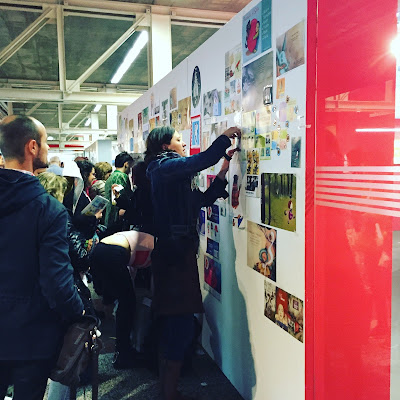 I had read on other blogs about the "Illustrator's Wall" which are several white walls designated for artists to hang promotional posters, postcards, etc. Everyone said it fills up fast so I got there right on time on opening day. I made it to the wall about 20 minutes later and sure enough, it was getting crowded quickly. 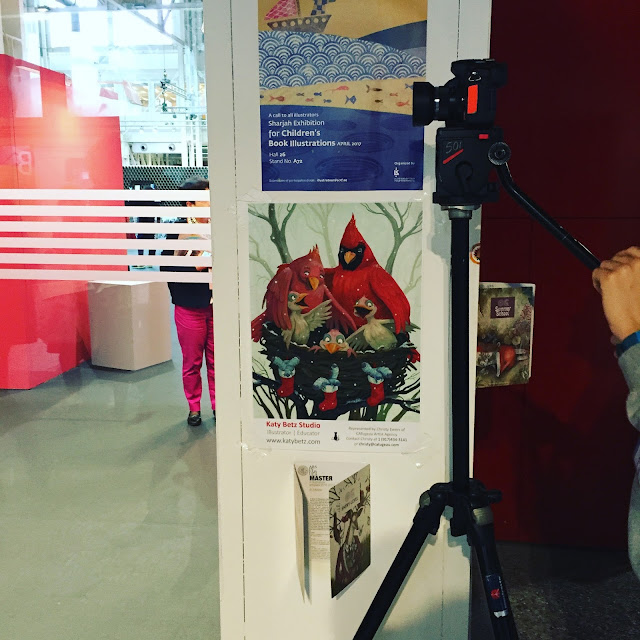 I found a nice spot for one of my posters. However, much to my surprise and disappointment, someone took down my poster and put theirs up instead the very next day!!! :( Luckily I brought two more posters and put them on other walls and nobody touched those. In the picture below, my poster is the portrait of the girl with smoke billowing across her face. 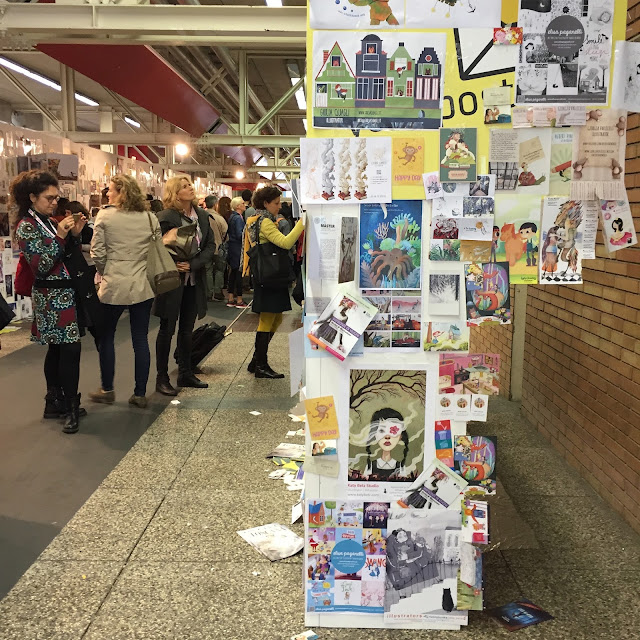 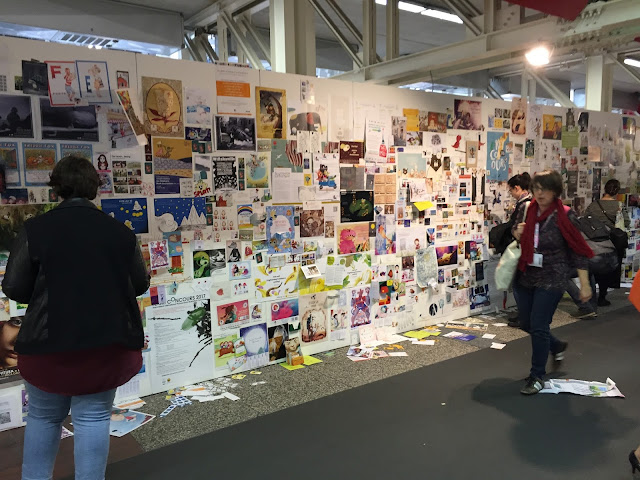 As you can see, the walls get crazy! The biggest lesson I learned from observing other people is to plaster your stuff EVERYWHERE. Many illustrators taped a postcard to the wall every three feet. Some people made boxes for business cards and stuck those to the wall. Other people (which I thought was very clever) were using the plastic name badge holder for business cards and then taping/pinning that to the wall. It gets so crowded that the rule of thumb seems to be "dominate or be drowned". Good to know for next time. Realizing this after the wall was already full, I resorted to placing stacks of my postcards on the floor every three feet, which seemed to work effectively. People bent over to pick them up :) Next time I will bring smaller posters, postcards AND business cards. 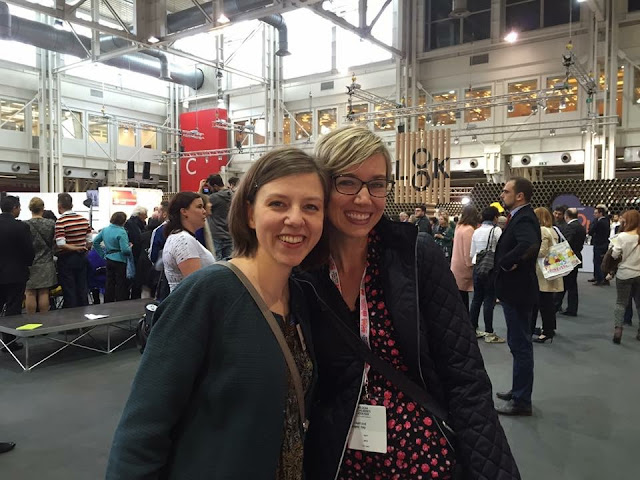 One really cool highlight of journeying to Bologna was getting to meet people from all over the world. I actually got to meet up with a fellow illustrator, Constanze von Kitzing, http://www.constanzevonkitzing.de who is also represented by my agent Christy Ewers at CATugeau. She is from Germany and signed on with CATugeau to represent her in the US. Constanze goes to the Fair almost every year since it's not too far away. She spoke on a panel this time, discussing the topic of working across borders. It was fascinating to hear how she and other artists became international illustrators. It really opened my mind up to the same possibility, and the relative ease of making it happen. 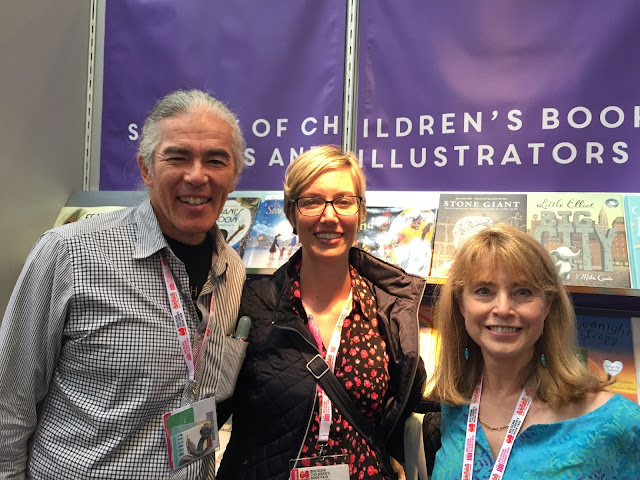 I found the SCBWI booth and said hi to international coordinators Chris Cheng and Susan Eaddy of Team Bologna! 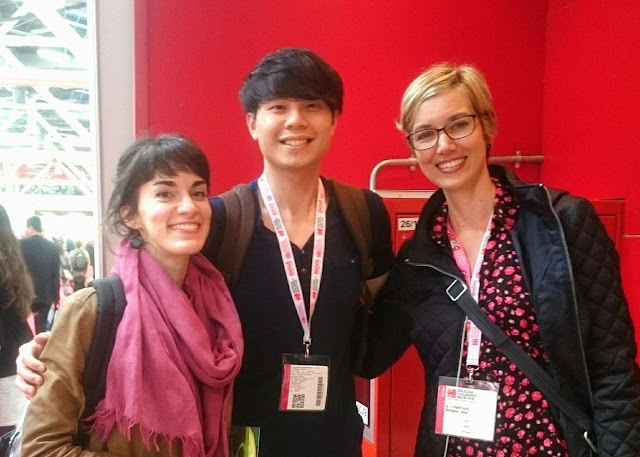 I think one of the best things about Bologna was meeting other attendees! I ran into a lot of really cool illustrators, editors, rights managers, and publishers everywhere I went - on the bus, standing in line for gelato, sitting at a restaurant, at the airport, just walking down the street. It's as though the city of Bologna is taken over by children's book fanatics for 4 full days. Here are two fabulous illustrators I had the privilege of meeting: Sara Alunno from Italy and Mickey Lam from the UK. Check out Mickey's work at http://illustratorlam.com and Sara's work at www.carciofocontento.com 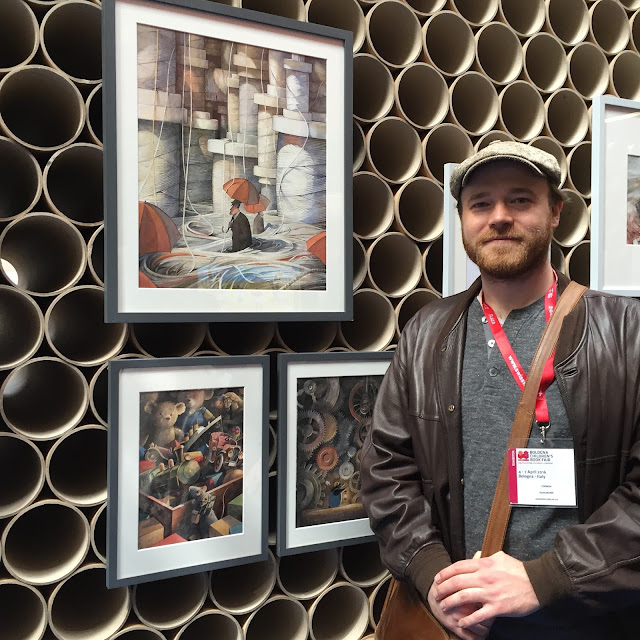 Germany was the featured country at the Fair this year. Several German illustrators were showcased - one of whom was Torben Kuhlmann ( http://www.torben-kuhlmann.com). He illustrated the beautiful book Lindbergh: The Tale of a Flying Mouse, and Moletown. It was such a treat to see his original work - simply stunning! I noticed that nearly all of the 20 or so German illustrators worked traditionally (including Constanze!) and a lot of the work has a textural rawness which I found very appealing. Out of all the aesthetic themes from each country, I personally was drawn to German artwork for these reasons. The Fair also had a new hall this year for licensing. Amidst the big corporations, there were a few booths featuring entrepreneurs such as Fran Bravo from Spain. He had an amazing and fun collection merchandise, along with a lot of good advice on branding and self-promotion. Check out his work and learn more at http://www.franbravo.com. 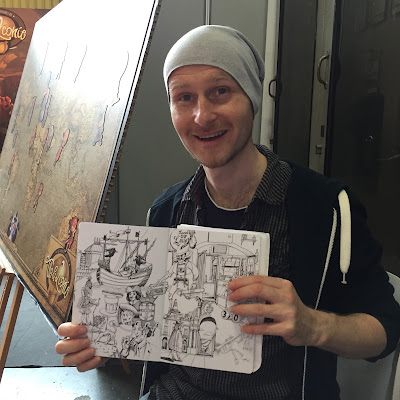 Another amazing illustrator I met was Andre Martini. He is very prolific (as you can see from this sketchbook page, he fills up every single page front and back with tons of pen and ink sketches). You can see more of his work here: http://andremartini.net/home

In my experience, the Bologna Fair was great for meeting fellow artists and connecting with creative people from around the world who are passionate about children's books. It made me feel like a citizen of the world. However, the fair also had a way of making me feel incredibly bummed out. Why? Because nearly ALL of the publishers are not there to talk to illustrators. They are there to buy and sell international rights to books. Weeks before the trip, my agent and I tried to make appointments with editors but their schedules were already booked and later I found out that some of them weren't even there. So I ended up walking the long hallways, feeling desperate for someone to look at my portfolio or let me leave behind a postcard. Sometimes there were signs that said "please do not disturb", and if you loitered they would just ignore you. SO that sucked, especially on the first day. But by the second day I started to figure out a game plan. 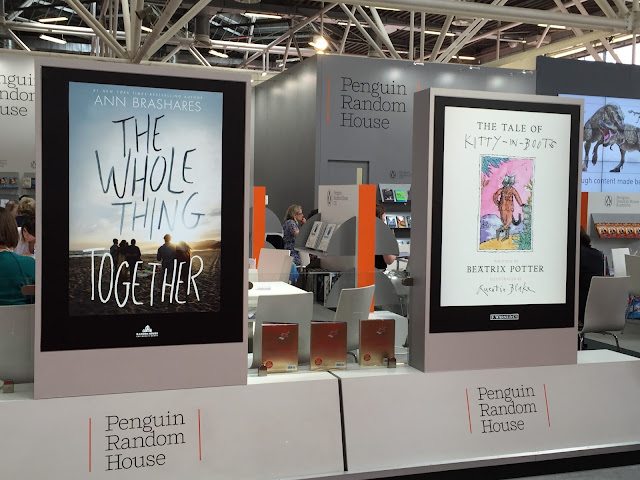 My game plan consisted of the following: 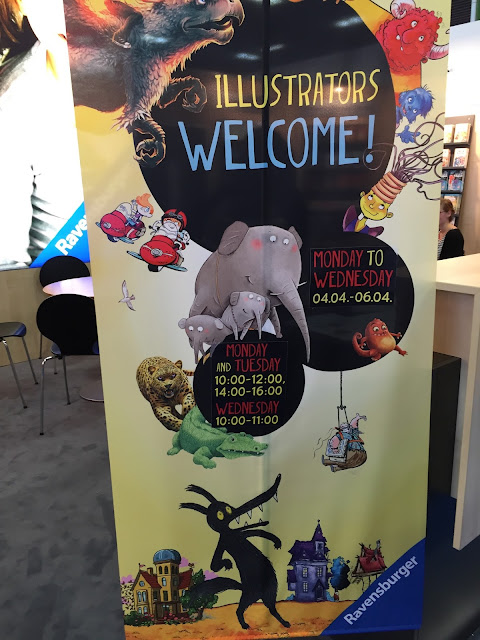 Some booths actually WANTED to talk to illustrators and announced the days/times when they would be reviewing portfolios. I would circle them on the map and return later. However, there would always be a huge long line of illustrators waiting for a review, which seemed like a waste of time, so I never stood in line to get a review. Instead I just tried to approach people on my own - which actually worked (albeit rarely). Basically, I would catch someone's eye and smile (key component!) and say, "Hello! I'm an illustrator and I really like the books you publish. I was wondering if anyone was available to look at my portfolio?" I got lucky 5 times. Below are a few pics of some of the people who reviewed my portfolio. 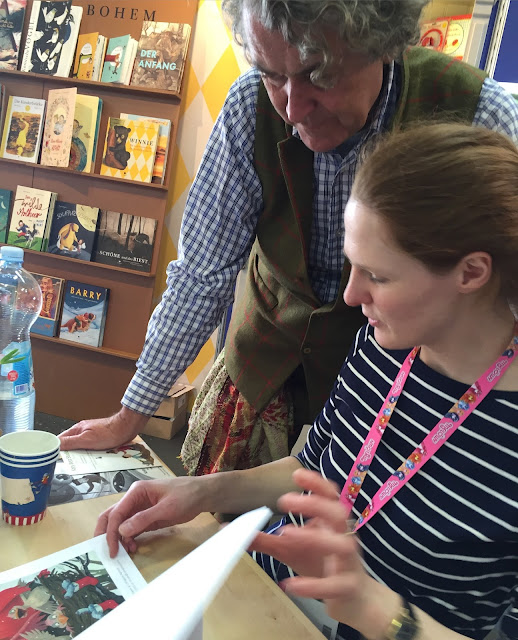 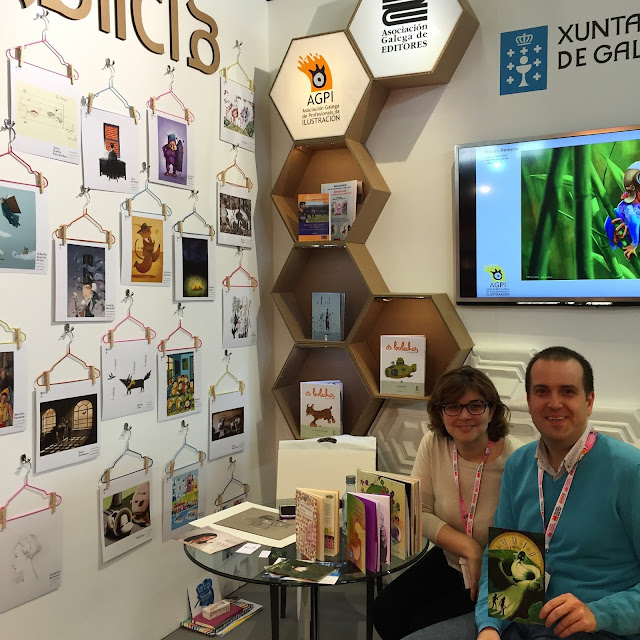 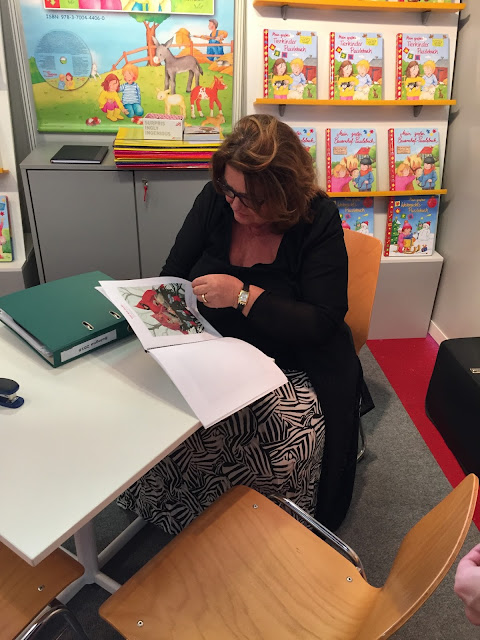 So, overall it was a truly amazing experience (including the challenge of getting noticed by publishers). I have made friends around the world and my eyes have seen the diverse and yet unified expression of humanity portrayed in children's books. No matter the country, no matter the language barrier, the illustrations in children's books create a cultural bridge that connects us all to one another. I think attending an international fair like the Bologna Children's Book Fair is an exercise in empathy and a test of universal truths. I left the fair with a deeper understanding that there is one race and we all share the same experiences. It was a 4-day immersive study of each culture's world view. I found it to be utterly fascinating! It also made me recognize my world view and appreciate my cultural heritage and sense of "home". 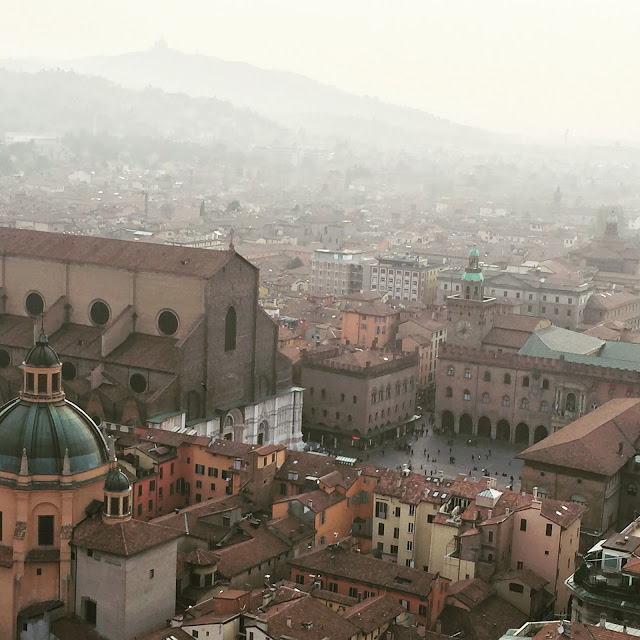 Ok. So that's it for the Fair. I could go on and on for days about the city of Bologna. I spent about 3 days exploring this medieval city - it is awesome. If you decide to attend the Fair, be sure to make time for the city too. There's a lot to see and do. I visited all the historical sites, such as the churches and towers (climbing it was a bit freaky), went to the national museum which has a fabulous collection of medieval art, and took a tour of the art school next door. I ate pastries and pasta every chance I got. I even took a day trip to Florence, which is only 30 minutes south by train. 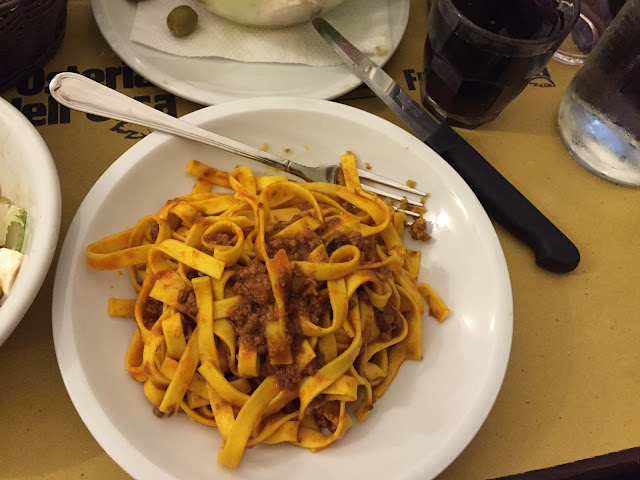 This is "tagliatelle all bolognese", which is simply pasta with meat sauce - only it's to die for. 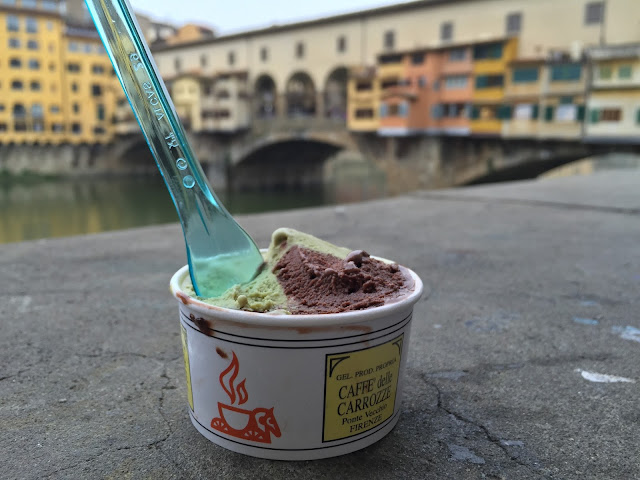 As I mentioned, I took a little day trip to Florence (I LOVE FLORENCE. I've studied abroad there twice, have a large tapestry of the city hanging in my living room, and I even named my dog Florence). If you go to Bologna, try to squeeze in this city too. Most Fair attendees stayed in Bologna, but the one illustrator that I met, Andre Martini, actually stayed in Florence and took the train to the Fair each morning, which is a totally doable option. As for me, I decided to stay in Bologna and booked an apartment through AirBnB, which worked out great.


And for some closing thoughts, just for fun, here's a quick video clip of the city of Florence from the top of the duomo (aka Santa Maria Del Fiore cathedral). Thanks for reading!