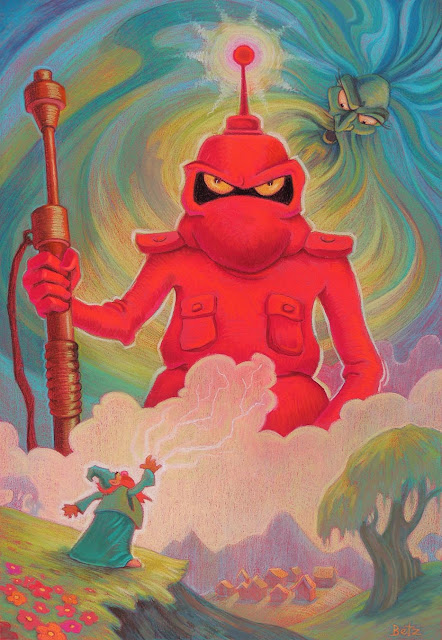 A few years ago, the wonderful illustrator William Stout had a show at Laguna College of Art & Design. I remember being totally stunnded by his work! He's like a modern day Arthur Rackham, the way he draws with pen and color washes. I also remember right in front of the entrance to the gallery show, there was a drawing of a weird robot riding a funny looking bird-horse. That image always stayed with me for some reason.

Fast forward to a few months ago: I was invited to be in a show called Double Feature, where old midnight movie posters are to be re-interpreted. The curator gave me a list of old films to choose from, and behold! on the list was Ralph Bakshi's Wizards 1977 - the film that William Stout had created that unforgettable poster for, the one I had seen at the gallery. So I claimed it, and decided to create my own version for the film. 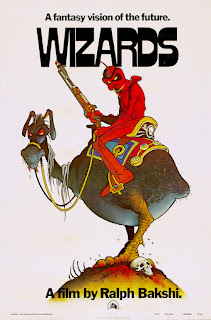 In a nutshell, the film is about twin wizards, one good, the other evil. They vie for power over technology, symbolically represented by a futuristic robot named Necron 99, later known as Peace. I wanted to show the wizard characters trying to influence the robot, each hoping to win him to their side. I also wanted to add a softer appeal...less comic book and more children's book aesthetic.

Below are a few process pictures. I used a red sheet of Canson paper and worked with pastel pencils. Final artwork is 13.5 x 20.5, half the original poster size (27x41). 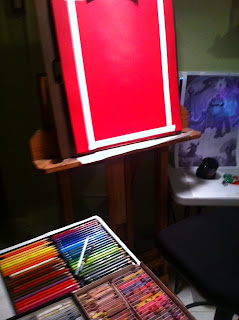 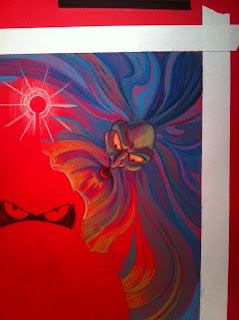