Visit to the Land of Giants 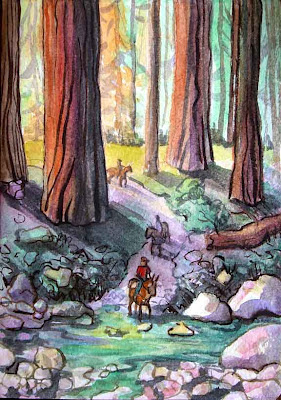 It was only until I moved out of California that I realized how amazing the state really is (ok, not the political/financial side of things) but rather the natural beauty. I recently had the opportunity to explore the south Sierra Nevada region and the Sequoia National Forest. My sister and I met our aunt, uncle, and cousins for a 4-day camping/horseback riding adventure. We trailored our horses and mules to Springville then went up the mountain to a campsite deep in the woods.

I don't own a horse, so I borrowed my Uncle's mule the first day. Mules are awesome!!! In case you don't know, a mule is the result of a male donkey and a female horse. Mules aren't as stubborn as donkeys and aren't as flighty as horses. They can see their back feet and know exactly where they are stepping (making them a lot safer to ride!) I have a new appreciation for mules, besides the fact that they are adorable with their giant ears.

Anyway, this was my first trip to the Land of Giant Sequoias. I will never forget driving up the winding mountain road trying to spot one. We suddenly turned a corner and THERE WAS A GIANT TREE, unlike any tree I had ever seen before. It dwarfed all the other trees in height and girth. The bark was bright orangey red. Breathtaking! 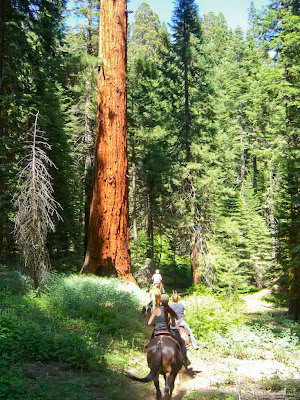 The whole trip I couldn't stop gawking at these trees. Standing in their presence is humbling. They demand your attention and reverence as they loom 100+ feet above your head. They are like great ancient pillars, wise and friendly. We pilgrimaged to one tree called the Adam tree because it was 2,000 years old (I secretly re-named it the Christ tree - seems more fitting). What is one supposed to think and feel when looking at a living organism that is 2,000 years old? I touched it's spongy red bark. All I could do was stand there in awe. Later, this encounter made me think a lot about my comparatively short lifespan, and how thankful I am to have crossed paths with this tree while walking on earth. 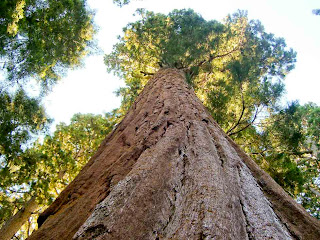 Epic beauty was the theme of the entire forest. We rode through idyllic meadows, crossed rivers riddled with gigantic boulders, and camped under the starry sky. I wanted to weep at the sight of it all because it was so pure, sacred, and just felt so right. It was God's country, untouched by anything evil. The air was pine-scented fresh, colors vibrant, and so so peaceful. And at night, THE STARS!!! So clear and bright! It had been years since I'd seen the night sky without some sort of light pollution.

I cannot experience such perfection and not be moved to thoughts of God, wonder and sublimity.
I just can't.


I can rarely put my feelings into words when I see things so marvelous. That's usually when I turn to writers, philosophers, and poets to help me out. To what these two have to say, I say - Ditto:


“When I look out on such a night as this, I feel as if there could be neither wickedness nor sorrow in the world; and there certainly would be less of both if the sublimity of Nature were more attended to, and people were carried more out of themselves by contemplating such a scene.”
― Jane Austen

“Whereas the beautiful is limited, the sublime is limitless, so that the mind in the presence of the sublime, attempting to imagine what it cannot, has pain in the failure but pleasure in contemplating the immensity of the attempt”
― Immanuel Kant, Critique of Pure Reason


Here are a few more pictures from the trip. We were invited to a belated 4th of July part at the Packing station where I rented my black and white horse named Lucky. They had 15 dutch ovens full of delicious home cookin', then after that two cobblers and homemade ice cream. Amazing! 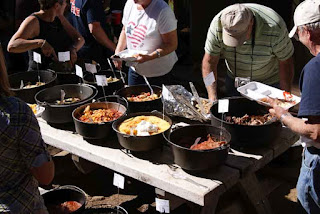 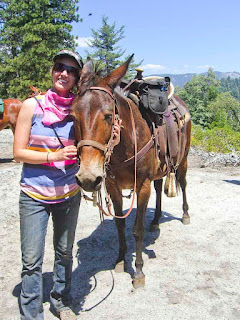