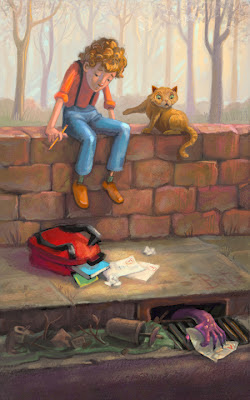 Wiley is a character I've been fond of since Grad school. He keeps showing up in my pictures! Here's a fun and bizarre illustration featuring Wiley, his cat Pearly, and the sewer guru. You get to make up the rest!

Till next time -
Katy :D
Posted by Unknown 1 comment:


Recently I've been contemplating Gustave Courbet, a French painter who lived in the 1800's. He led the Realism movement, painting subject matter that was considered vulgar back then, like peasants and working conditions of poor people. As a result, he was considered an outsider amongst his contemporaries, except for likeminded Daumier and Millet. Seems like quite a few artists were drawn to beautifully depicting harsh realities, such as Vincent van Gogh who also painted similar things and suffered for it.

But, Courbet was a very bold fellow. He was outspoken, challenged the academic and moral standards of his time, and possessed a deep interest in the darker sides of life around him. This brought him notoriety, sales...and exile. He was thrown into prison for requesting that a public column be dismantled and rebuilt elsewhere because it had no artistic value. He was released but couldn't pay the fines, so he fled to Switzerland.

Many younger artists looked up to him however, including Monet, Whistler, and Cezanne (interesting side note - Monet included Courbet's portrait in his version of Manet's controversial Le dejeneur sur l'herbe). So, with this kind of influential power, I wanted to examine Courbet's ideas a bit closer. Here are a few quotes. See what you think:


Beauty, like truth, is relative to the time when one lives and to the individual who can grasp it. (Gustave Courbet)


I have studied the art of the masters and the art of the moderns, avoiding any preconceived system and without prejudice. I have no more wanted to imitate the former than to copy the latter; nor have I thought of achieving the idle aim of art for art's sake. (Gustave Courbet)


The expression of beauty is in direct ratio to the power of conception the artist has acquired. (Gustave Courbet)


To know in order to do: such has been my thought. To be able to translate the customs, ideas, and appearance of my time as I see them – in a word, to create a living art – this has been my aim. (Gustave Courbet)


It is fatal for art if it is forced into official respectability and condemned to sterile mediocrity. (Gustave Courbet)


Art or talent, for an artist, is merely a means of applying his personal faculties to the ideas and the things of the period in which he lives. (Gustave Courbet)
Posted by Unknown 9 comments: