My friend Lauren and I are having an Art Day!! (which is where we hang out and crank out art) Here's another charcoal drawing that I made, and another is in progress as I type! Stay tuned to see more.. 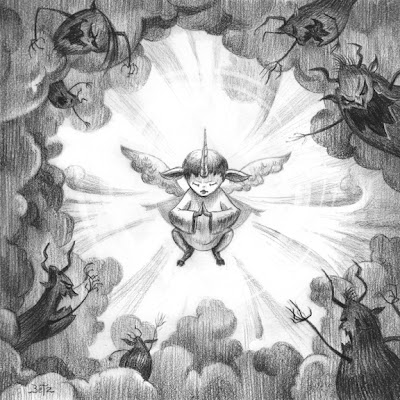 Guardian of the Heart: Shine

I'm working on a set of 10 charcoal drawings for the holiday show at Division 9 Gallery....which means I have to make at least 2 a day in order to meet their deadline! Luckily the first one turned out pretty fast, hopefully the others will too. I'm using this show as an opportunity to create value comps for my Guardian of the Heart series which will be for my Grad show in April. So, this drawing here will likely become a painting later on. 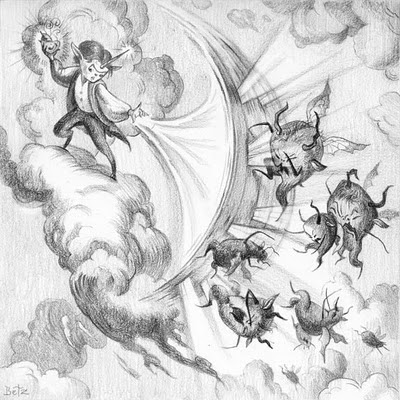 I developed a few characters for the book Lost Ones: Ghosts of Paris (which, by the way is NOW available on Amazon.com !) and now for fun I am designing scenes. This is a charcoal drawing of the character Dante. 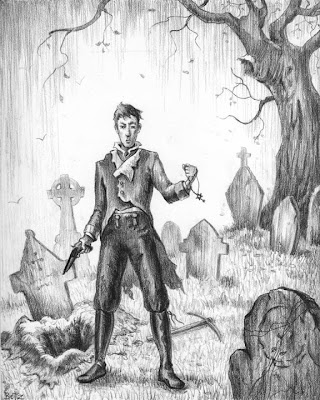 November 13th was Illustrator's Day! I was a volunteer this year - so fun! We had a great line-up of speakers and an awesome turnout. 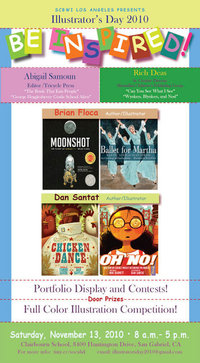 - I missed author/illustrator Brian Floca's keynote speech because I was outside helping with the portfolio reviews!

- Agent/author Jennifer Rofe gave a presentation on how to promote your book. She and illustrator Mary Peterson just published their own book with Charlesbridge. One of her tips that really convicted me was "Learn to Write!!!" She said writing AND illustrating are gifts from God if you can do both, because they provide you with best of everything. Every time I think about writing, I feel overwhelmed - there's so much to learn! It's going to take a lot of practice, which means if I'm going to try I better start NOW.

- Rich Deas, designer and director at MacMillan Publishing, gave an inspirational lecture about his career and also shared insider tips of how he goes about finding and hiring artists. His advice: Get out there! You never know when you'll get a call. Send out samples, and make sure your compositions work as a thumbnail. Designs need to get the point across quickly. Also, networking and knowing people are your best in. He really praised everyone for being at the conference because usually he only responds to emails if he has met the person in real life.

- Editor Abigail Simon gaves 6 easy (difficult) steps to becoming a Kid's Book expert. 1) Do your homework (read 100 children's books). 2) Read Uri Shulevitz' book Writing with Pictures and Molly Bang's book Picture This. 3) Know the picture book format 4) Join a Kid's Lit Community (SCBWI) 5)Attend a Book trade show like ALA or Book Expo America to get a sense of the market. 6) Think like an editor. Answer these questions....why should I acquire this book? Who is the target audience? What are the competitive titles? What are the key selling points? What is my platform? What resources do I have to promote my book?

- Illustrator Dan Santat shared his career story with us - amazing! Some advice from Dan: 1) Never say you don't have enough time to work towards your goals. 2) Learn to say NO. 3) Befriend everyone you can on Facebook, network like crazy. 4) Never settle. Make the best, bring your best game if you want to run with the best.

Illustrator's Day was long (I'm proud to say I was the first and last car in the parking lot!) but it was WAY worth the energy. Children's book people are incredibly friendly and every time I attend a conference put on by SCBWI, I feel more connected, inspired, and knowledgeable than I did before. I am already looking forward to the next one!
Posted by Unknown No comments:

Ok, I've been slightly overwhelmed by all the art events that have been taking place. I'll begin by telling you about the one that got the ball rolling - the opening reception of "Interruption", a solo show of Joe Sorren's work at Grand Central Art Center in Santa Ana.

I first heard about Sorren from my friend Jacob. We were studying at Laguna College of Art & Design, and one day in the tiny library Jacob showed me a little red book full of Sorren paintings. I immediately connected with the work, especially the color palette, bizarre figures, and imaginative scenes.

Now here we are a few years later, and Sorren is here in town having a solo show. I HAD to go and meet him, of course. Lately I've been working in acrylics, but when I walked into the gallery I freaked out by how beautiful his oil paintings looked. The layering technique of oils produces such depth and luminous color! I knew then and there that working in acrylics was a waste of time (at least when it comes to gallery work). I bought Sorren's book and had him sign it! Here's a documentation of the me meeting Joe (pictures courtesy of Jennifer Cheng). 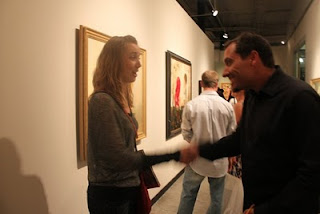 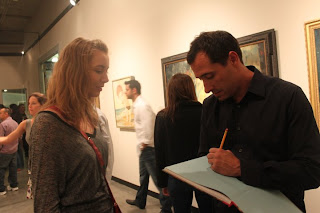 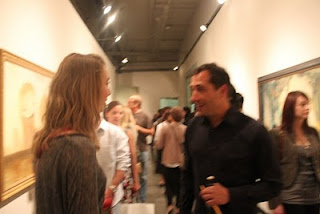 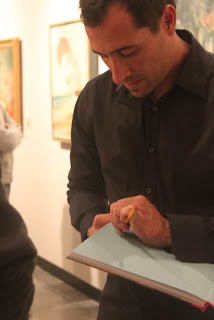 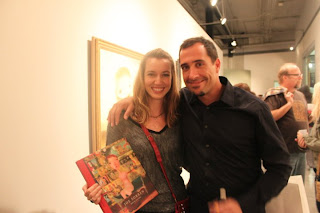 If you are not able to see the Interruption Show in person, you can take a virtual tour at www.joesorren.com

OK. If meeting Joe Sorren wasn't awesome enough, he then came to Cal State Fullerton to give a lecture! I got to sit and chat with him about his process. Here's what I found out:

- He stopped doing illustration in 1999 and now just paints for galleries.
- He has a solo show about every 3 years.
- Two of his influences are JMW Turner and Seurat because they were risk-takers.
- His painting process is intuitive and subconcious. He doesn't sketch or plan. He gets a canvas out and begins pushing paint around, guided by an internal dialogue.
- He doesn't use reference because he prefers to see what his memory and imagination can invent.
- He prepares his canvases with 3 layers of gesso (sanding between coats) then puts a layer of Gamblin Galkyd to give a mirror-like smooth surface. He also uses Galkyd to "save" layers during the painting process.
- ADVICE: 1. Make the best piece you can at that moment in time. 2. Surprise yourself, keep the wonder and you will always stay fresh and inspired and in love with what you do as an artist. 3. Believe in what you are doing, and others will believe too.

What I loved most about Sorren's lecture was that he openly stated he is trying to be as true and sincere as possible. He said he enjoys keeping his work "Rated G" although his paintings deal with tough themes. He confessed that he is "dopey in his heart"and doesn't need to be "hard core" or all about the money. Instead it's his desire to make art that transcends and lasts.

I find myself relating to Sorren's philosophies and artistic practices. I recently went to a lecture by Gary Baseman (blog post on this coming soon) and was not inspired at all, rather disturbed. It's because my world view doesn't align with someone like Baseman, but I do find my aspirations taking similar shape as Sorren. Perhaps this is why I feel a strong connection to his work.
Posted by Unknown 2 comments:

Indications of the holidays are all around, and a few come in the form of art shows. Each year, I look forward to Division 9 Gallery's "50 @ the 9" show, Sarah Bain Gallery's "Holiday Group Show", and the Riverside Art Museum's "Off the Wall" show, all of which are meant to provide collectors with an opportunity to buy art to give as presents. They make perfect little gifts!

This year I have 4 pieces of art in the RAM's "Off the Wall" exhibition and sale. Here are two of the four: Charcoal on watercolor paper with a ornate trimmed border, floated on a 4x5 wood block. 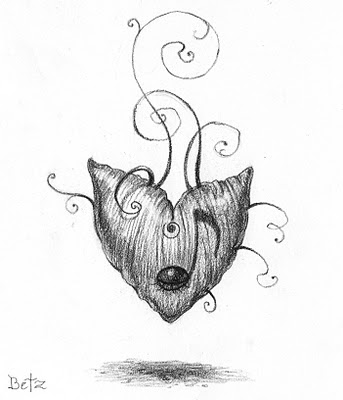 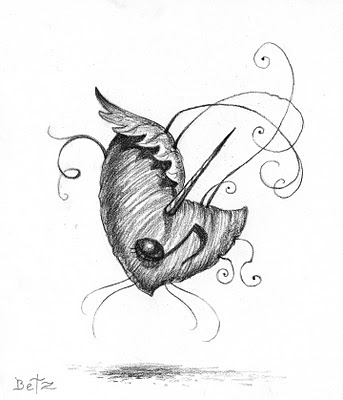 Hey everyone, I am excited to show you some new charcoal drawings I made this weekend! These are done with charcoal on watercolor paper, then mounted onto wood panel. I took these from my sketchbook and brought them to a finish, and I think they will come in handy as value studies for future color paintings. FYI the black border is not part of the piece, but I left it on there so the decorative border would be visible.  ;) 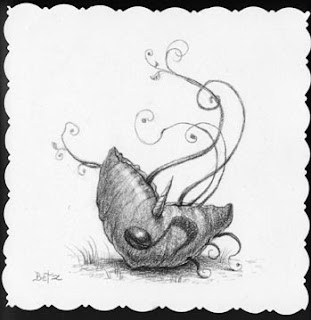 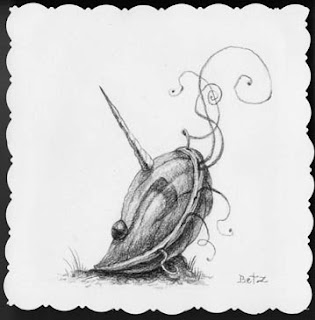 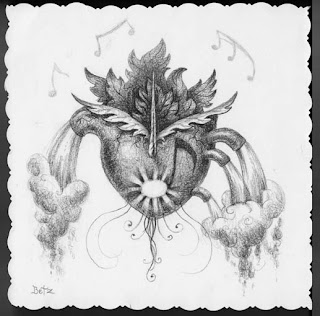